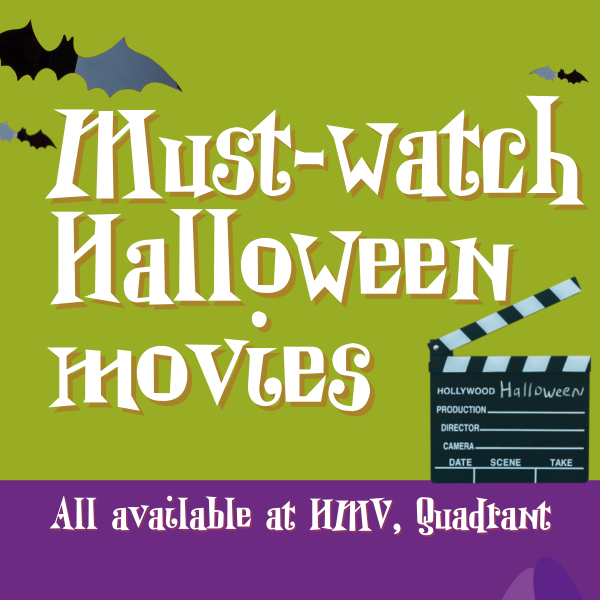 Nothing screams Halloween like this list of epic movies which you can buy from our very own HMV.

We have slashers, supernatural, psychological and comedy horrors listed, with a splash of kids’ classics, thrown in for good measure. Whether you’re into classic horrors that have stood the test of time, gorey slashers from the 90s, or spell binding witchcraft, you’ll find something to satisfy your scare cravings as we approach October 31.

This American supernatural slasher was written and directed by the godfather of horror, Wes Craven. It follows a group of Midwestern teenagers who fall pray to Freddy Krueger, the disfigured killer who preys on the teenagers in their dreams, which in turn, kills them in reality. Going to sleep won’t be easy for at least a week after watching this. It’s why it’s such a classic.

A Disney, cult classic for kids of the 90s. Its star-studded cast (Bette Midler, Sarah Jessica Parker and Kathy Najimi) comedic script, and Salem-centric storyline is everything you need for a great family film-night. Plus there’s a loveable zombie, a talking cat and probably the world’s best rendition of ‘I Put a Spell on You’.

Halloween has become one of the most successful horror movie franchises of all time. While there are seven sequels and two reboot series, there’s nothing quite like the original. This is where we first meet Mike Myers, who at six years old, brutally murdered his 17-year-old sister. On October 30, 1978 a 21-year-old Michael returns to his quiet hometown after escaping Smith’s Grove sanitarium. This is where he looks for (and finds) his next victims…

“What’s your favourite scary movie?” This has to be the most iconic slasher movie. A fright-masked killer disturbs middle-class suburbia. As bodies mount, so do suspicions around motives and the killer’s identity. Bursting with twist and turns and clever comic relief, this film has it all, a must-watch this Halloween. Plus, it stars Courntey Cox, Neve Campbell, Drew Barrymore, David Arquette, and so many other stars of the big and small screen.

Not just a great theme song… This iconic film is dripping in whit, gothic, aristocratic glamour, and monsters – the perfect combo this spooky season. The Addams mansion is turned upside down when a man claiming to be long-lost Uncle Fester arrives at the door. Lawsuits, cunning plans, and a big dollop of macabre characters, will have you and the whole family, hooked from beginning to end.

This is the story of an ancient, shape-shifting evil, Pennywise, that emerges from the sewer every 27 years to prey on the town’s children. The concept is frightening, and so is Pennywise, who takes form in a demonic clown. Underlying the frightful story is a story of friendship between the film’s fantastic group of friends who battle with their own, personal fears as well as the evil that takes over their town. An iconic film and a must-watch.

The 1980s at its finest. Winona Ryder, Catherine O’Hara, Alex Baldwin, and Michael Keaton star in this twisted tale of haunting and humour. The plot follows a couple that die in a car accident and are trapped haunting their country home and the new family that now live there. They’re joined by an obnoxious poltergeist, Beetlejuice whose sinister ideas make the film what it is – a delicious mixture of supernatural, monster-filled, comic perfection.

If you go down to the woods today… This film was a phenomenon when it was released in 1999. It’s fictional but made to seem very real with its use of handheld cameras. The story follows three film students who travel to a small town in Maryland to interview locals about a legendary local murderer. Things take a turn for the worse in the spine-chilling woods that is so synonymous with the film.