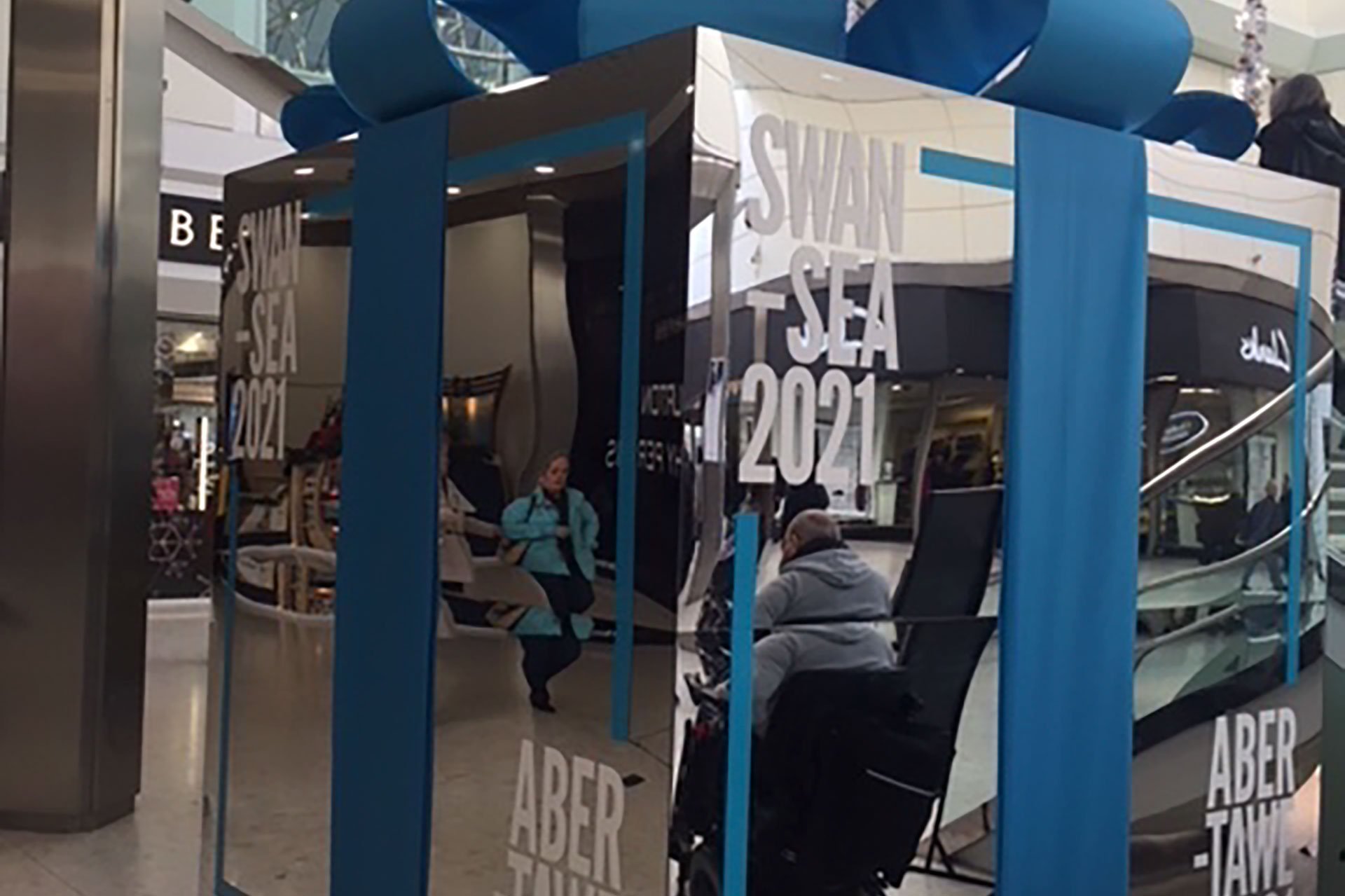 Swansea is one of the five shortlisted cities for the UK City of Culture 2021 title, along with Coventry, Paisley, Sunderland and Stoke-on-Trent. If successful, it will bring significant social and economic benefits to Swansea and the region.

The current UK City of Culture, Hull, is estimated to enjoy an economic boost of at least £60 million whilst already having seen a £1billion boost in investment since being announced the winner of the title.

Lisa Hartley, Quadrant Shopping Centre manager, said: “Here at the centre we are extremely proud of Swansea and all that the city represents. It would be an honour to be awarded UK City of Culture 2021 and we are 100% behind this inspiring campaign.

“Swansea has previously been acknowledged as the most beautiful place to live in the UK, and everyone can see why as it offers a diverse, vibrant and exciting environment. It is a city full of variety and culture, so we’re calling on all our customers to join us in supporting the bid.

The Swansea 2021 bid team includes Swansea Council, Welsh Government, Swansea University, the University of Wales Trinity Saint David, Abertawe Bro Morgannwg Health Authority, Museums Wales and Tidal Lagoon as well as several creative professionals, businesses, arts and cultural leaders. These groups are all working together to ensure the outcomes in the city’s bid for the Swansea people to ensure the economy is as strong as possible.

Leader of Swansea Council, Councillor Rob Stewart, said: “We are delighted to have Quadrant Shopping Centre backing our bid for UK City of Culture 2021. We’re working hard to secure this status and its benefits for the city and region so having this type of support is vital. Our mirrored cube has proved to be a great talking point whenever and wherever it has popped up over the city and we hope visitors to the Quadrant will enjoy it and take some time to reflect on Swansea’s culture and our ambition for Swansea 2021.

“Winning UK City of Culture would be a fantastic opportunity for Swansea which would benefit everyone in the city. Hull’s UK City of Culture 2017 status has already seen a £1billion boost investment in the city – alongside pride, new jobs and improved reputation. This really does have the ability to transform Swansea forever.

“We need to show the judging panel that we need it, we want it and we can deliver it. Having the support of the city shows that, so we are urging everyone to get behind us by backing the bid.”

What is the UK City of Culture?
The UK City of Culture is a title given to a city for one year during which it creates a programme of local, national and international events which becomes a catalyst for investment, regeneration and economic growth.

The title, which is awarded once every four years, is administered and judged by the UK Government’s Department for Digital, Culture, Media and Sport. The inaugural holder was Derry-Londonderry in 2013, with Hull taking over the title this year. Both cities have reported significant social and economic benefits from holding the title. Winning UK City of Culture status could do wonders for Swansea’s economy, delivery a multi-million-pound boost for the city.

What do we get if we win?
Winning the UK City of Culture brings significant social and economic benefits.
To illustrate, Liverpool welcomed an extra 9.7 million visitors to their city during their European Capital of Culture year in 2008 – an increase of 35%. Derry-Londonderry, who took the first UK City of Culture title in 2013, reported that the accolade added £47 million to its coffers. Hull, the most recent UK City of Culture winner, is estimated to enjoy an economic boost of at least £60 million whilst already having seen a £1billion boost in investment since being announced the winner of the title in 2013

Of course, there are many other benefits to be gained by winning this title which are beyond financial dividends. The international and national exposure enjoyed by UK City of Culture winners, and the feel-good factor and sense of pride this fosters among the city inhabitants, is worth its weight in gold.

For all events taking place at Quadrant Shopping Centre please go to www.quadrantshopping.co.uk